Hey everyone, and welcome to Day 4(!!!) of the Tokyo Inter-School Hackathon! A quick skim through the Discord channels of each of the teams reveals that most of them are well on their way to having a prototype ready by Saturday. Today’s Bonus Point Challenge was another amusing one, asking teams to submit a humorous team slogan. Many of them have gotten a chuckle or two out of me, so I look forward to casting my vote!

The first interview of the day goes to high school team 2b|!2b from K. International School, the winners of the Bonus Point Challenge for the best team name. Throughout the event, they remarked that they learned a lot about coding collaboratively, particularly through the implementation of services like Github. My own experiences with sharing code are less than rosy, to say the least… I vaguely remember a desktop littered with zip folders and getting approximately 37 errors when I tried to merge code manually because I hadn’t bothered to set up a Github repository… Moving on from the joys of collaborative coding, the members of 2b|!2b shared part of their project with me as well. They seem to be making a website to encourage users to reduce their carbon footprint, as seen in the screenshot. As for their overall takeaways, one wise member remarked that this hackathon has taught them, yet again, why services like Wix, Weebly, and Squarespace are so incredibly popular. 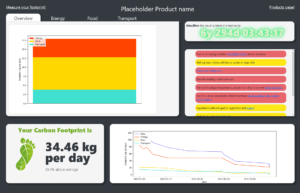 Next up, we interviewed high school team Hello.World() from the Indian International School in Japan, the winners of the second day’s Bonus Point Challenge. They also mentioned that they have found Github to be a valuable tool throughout the hackathon. Specific to their team’s project, one member explained that they are currently learning how to create a recommendation algorithm, while another discussed their work with databases, integration of code into applications and websites, and various new python libraries. Although the students at India International School in Japan have exams coming up, we’re continually impressed by how quickly and efficiently they have managed to work on their projects and produce results. When asked about their time management strategy, one member answered, honestly, that “We don’t manage time, time manages us.”

The final high school team we spoke to was “expected ‘;'” from the American School in Japan. This team consists of three very busy members, all of whom have managed to make time out of their packed week to work on their project. Only two of their members have previous experience coding, but they all had to learn HTML, CSS, and JavaScript for the first time during this event. Although this is their first experience with computer science competitions, I’m excited to see their final project!

Next, we spoke to middle school team Hacksters from India International School in Japan. Another team that is busy with upcoming exams, these students are hard at work on their website. Although some of the members have taken computer science classes in school, this is their first time competing. Their previous knowledge consists of the basics of Python and HTML, both of which indubitably served them well over the course of their challenge.

Although almost all of the students we interviewed stated that this was their first time participating in any sort of programming competition, with some being completely new to programming, I’m blown away by the high quality that I have seen from group to group.

To end today’s post, I would like to share a quote from team Stack Underflow which really spoke to me: “Listen guys, listen okay so, are you listening? It almost works-”